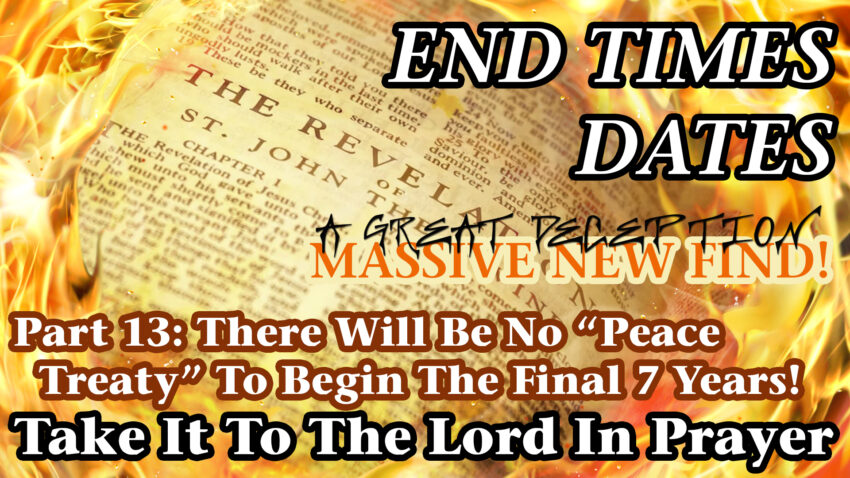 End Times Dates – Take It To The Lord In Prayer Part 13: There Will Be No “Peace Treaty” To Begin The Final 7 Years!

This video was originally produced This video was originally produced and published in September, 2021. Doug has an epiphany during the final days of September, when he realizes that the Antichrist’s “Peace Treaty” (or “covenant with Israel”) isn’t going to happen during the month of September – that he had been speaking of in the End Times Dates series. Doug hasn’t changed his mind on the timing. He still believes that Daniel’s 70th Week (the final seven years of the 490-year judgement God the Father imposes on Israel for its sin) started during September, 2021. The epiphany Doug has is when he realizes that because Jesus’ ministry was actually 70 weeks long, NOT 3.5 years as most people believe (a lie going back to the Roman Empire) – has lead to a complete misinterpretation of what’s actually happening in Daniel 9:26-27. This so-called “peace treaty” is a trick from Satan himself to get believers in the end times watching for a sign that would never happen. Join Doug in this short lesson on how we need to change our thinking on this issue.

PLAYLIST OF ALL EPISODES: http://www.takeittothelordinprayer.com

“2028 End Of The World Seminar” – https://www.youtube.com/watch?v=6YtG0etke28&list=PLcBDgtzZDmmYoKpSiGD94oF5fdX7Mc0mu

A researcher of all things Bible-related and End Times Bible Prophecy, Doug is a technical and creative professional in the music business as well as most aspects of digital media. He is also a researcher of truth and awareness issues, and host of “The Diamond Report” (www.thediamond.report). Doug enjoys “connecting the dots” of information from his favorite researchers (many of them clients) to come up with a clearer picture of where we are headed as a civilization, and humanity in general from a Christian perspective. For more information on his work in the music business, visit his website at www.diamondiscaudio.com. You can reach him at doug@takeittothelordinprayer.com or on most social media @diamondisc (except YouTube, that channel has been banned).