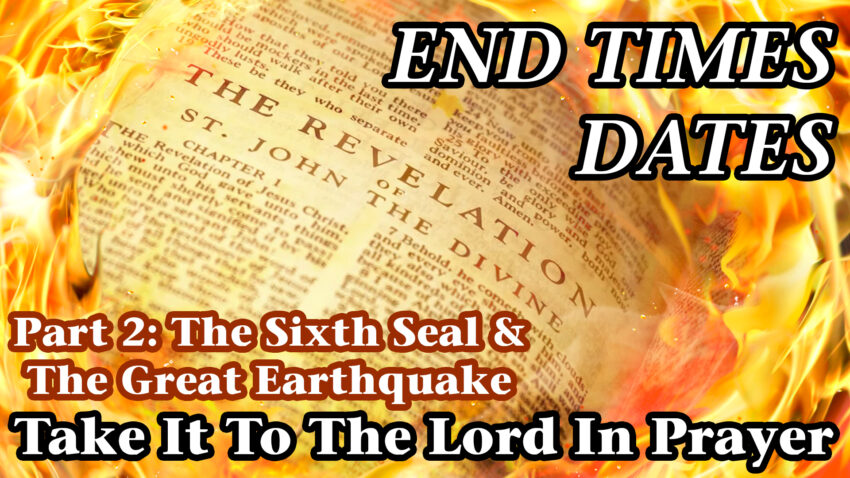 End Times Dates – Take It To The Lord In Prayer Part 2: The Sixth Seal & The Great Earthquake

This video was originally produced and published in July, 2019 following the M7.1 earthquake (and many, many aftershocks) that struck in California. Doug speaks of a recent rise in global earthquake and volcanic activity and how that may culminate in the Great Earthquake as prophesied in Revelation 6 at the opening of the Sixth Seal. Doug then shares what he believes the Lord has led him to with regard to the Rev. 9:13 four Euphrates-based demons (more than likely fallen angels) leading a 200 million strong army to kill a third of humanity, and speculates on who he believes may make up that army – where they come from.

PLAYLIST OF ALL EPISODES: http://www.takeittothelordinprayer.com

“2028 End Of The World Seminar” –
https://www.youtube.com/watch?v=6YtG0etke28&list=PLcBDgtzZDmmYoKpSiGD94oF5fdX7Mc0mu

A researcher of all things Bible-related and End Times Bible Prophecy, Doug is a technical and creative professional in the music business as well as most aspects of digital media. He is also a researcher of truth and awareness issues, and host of “The Diamond Report” (www.thediamond.report). Doug enjoys “connecting the dots” of information from his favorite researchers (many of them clients) to come up with a clearer picture of where we are headed as a civilization, and humanity in general from a Christian perspective. For more information on his work in the music business, visit his website at www.diamondiscaudio.com. You can reach him at doug@takeittothelordinprayer.com or on most social media @diamondisc (except YouTube, that channel has been banned).